< Chinese Scientists Develop Gene Therapy Which Could Delay Aging
Update Required To play the media you will need to either update your browser to a recent version or update your Flash plugin.
By Anna Matteo
04 February 2021

Scientists in Beijing, China have developed a new gene therapy that can turn back some of the effects of aging in mice. The therapy also extended their lives. This may one day help humans as well.

The gene therapy involved disabling a gene called kat7. Scientists have found this gene to be the main cause of aging in cells. 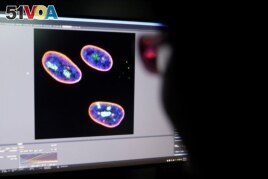 A researcher observes image on a screen showing the nucleus of human stem cells after KAT7 intervention, in the Aging and Regeneration lab at the Institute for Stem Cell and Regeneration of the Chinese Academy of Sciences (CAS) in Beijing, China.

Qu Jing of the Institute of Zoology at the Chinese Academy of Sciences, or CAS, is one of the supervisors of the project. After six to eight months, Qu said, the mice showed an overall improvement in their appearance and grip strength. More importantly, she added, "they have (an) extended lifespan (of) about 25 percent."

A different team of scientists at the academy used a method called CRISPR/Cas9 to look for genes that cause the most cellular aging. They identified 100 genes out of around 10,000.

The kat7 gene, Qu said, was most involved in the aging of cells. It is one of tens of thousands of genes found in the cells of mammals.

Researchers disabled the kat7 gene in the livers of the mice in the study. They used a method called lentiviral vector to modify the gene by inserting a genetic material into the cell.

Their findings were published in the Science Translational Medicine paper in early January.

Qu said they tested the working of kat7 gene in different kinds of cell types, including human stem cells, human liver cells and mice liver cells. For all those cells, the researchers could not find any cellular toxicity. "And for the mice, she added, "we also didn't see any side-effects yet."

Even with these findings, Qu told Reuters, the method to disable the kat7 gene is still a long way from being ready for human tests. She said they need more tests in other human cells and mice organs before experimenting the method on human aging and other health conditions.

Qu said she hopes to be able to test the method on primates next. But that would require a lot of money and much more research first.

"In the end," she said, "we hope that we can find a way to delay aging even by a very minor percentage...in the future."

Martin Quin Pollard reported this story for Reuters. Anna Matteo adapted it for VOA Learning English. Hai Do was the editor.

grip – n. the act of grabbing or holding something

mammal – n. a type of animal that feeds milk to its young and that usually has hair or fur covering most of its skin

toxicity – medical n. the quality, state, or relative degree of being toxic or poisonous

primate – n. any member of the group of animals that includes human beings, apes, and monkeys