< Are 'Rage Rooms' Good Mental Health Treatment?
Update Required To play the media you will need to either update your browser to a recent version or update your Flash plugin.
By Anna Matteo
01 March 2021

After nearly a year in pandemic lockdowns, many people have experienced stress. There are many different ways to reduce stress. Some people might choose to walk in nature or do another kind of exercise. Others may try some deep breathing or spend time doing an activity that makes them happy.

But some people have found a much different way to beat stress – by breaking things into a million little pieces. Since doing this at home could be destructive and possibly dangerous, places have been set up to permit people to destroy things legally and safely. 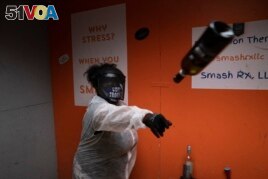 The places are called rage rooms. Rage is a term that means strong anger. A rage room is a private business where you pay to break things.

People who have used rage rooms and therapists who approve or disapprove of them recently spoke to the Associated Press.

Business executive and father Josh Elohim recently visited a rage room. After breaking a computer printer and other items, he said the activity "felt good." It was like the kind of exercise he used to get cutting wood at his country home in New York.

Since last winter, Elohim and his wife, Michelle, have been in lockdown at home with four kids, ages 4 to 17. The two said they badly needed a way to reduce stress and let off steam.

So, they went to marriage and family therapist Yashica Budde. After the family dressed in protective clothing and picked their "destructive devices," they entered a rage room.

The family is religious. Josh, the father, explained that their belief in God keeps them grounded. But he added with a laugh, "I'm not opposed to breaking some stuff to relieve some tension."

In the United States, rage rooms became more common in late 2019. Many people used the rooms to release stress related to life events, such as going through a breakup. Others visited rage rooms with friends as simply a way to have fun.

But the rooms became more popular as most other entertainment places started shutting down last March.

As the pandemic continues, Budde sees her rooms as valuable therapy. She has been a therapist for 13 years. She suggests different kinds of therapy to the people she works with, such as yoga and meditation. Usually these are quiet treatments. For something different, she decided to create rage rooms.

Other therapists have also been sending patients to her rooms, called Smash Rx. She hopes more will do the same.

How healthy is it?

Some therapists, however, thinks smash therapy is not a healthy form of treatment.

"I don't know of any therapist who would actually prescribe going to the rage room as a form of therapy," said Kevin Bennett. He is a psychologist and professor of psychology at Pennsylvania State University.

Bennett adds that especially if a patient has issues with violent behavior, sending them to a rage room does not seem healthy. He compared it to sending a person with a gambling problem into a casino for treatment.

The thinking behind this kind of therapy, Bennett says, goes back to Sigmund Freud's psychotherapy theories nearly a hundred years ago.

He explained that it is an "idea of catharsis." This means if you relieve your aggression and anger, you may feel better. The problem, he said, is that more recent studies beginning in the 1960s showed an unplanned result. If people learn that acting violently is okay in one situation, they may do so at other times.

Bennett said that while some supporters of Freud may still support the theory, he and most others think that rage rooms are best left as just a form of entertainment.

Tom Daly operates one of the oldest rage rooms in the U.S. His Break Bar opened in 2015 in New York City. He says his visitors tell him that smashing things makes them feel better. However, his rooms "are purely designed for fun."

Daly says that during the pandemic, his rage rooms have stayed full. Before, the rooms were not the busiest part of his business. That would be the bar and restaurant he operates next door. But those services have been closed for much of the pandemic.

"I think everyone's stressed out across the country," Daly said.

Among the destructors on a recent night were a mother and her three teenage daughters. After being stuck together in the house for months, they were all happy to break things.

The mother said her daughters have been out of school for a long time and do not know when they are going back. Her 17-year-old daughter, Piper, said she had lost her whole last year of high school.

But inside a rage room, the girls laughed and cheered as they destroyed item after item. One of the things smashed against the wall was a plate with "COVID-19" written on it.

stress – n. a state of mental tension and worry caused by problems in your life, work, etc. : something that causes strong feelings of worry or anxiety

therapist – n. a person who helps people deal with mental or emotional problems by talking about those problems : a person trained in methods of treating illnesses especially without the use of drugs or surgery

relieve – v. to reduce or remove (something, such as pain or an unpleasant feeling)

entertainment – n. amusement or pleasure that comes from watching a performer, playing a game, etc.

meditation – n. the act or process of spending time in quiet thought

prescribe – v. : to officially tell someone to use (a medicine, therapy, diet, etc.) as a remedy or treatment

casino – n. a building or room that has games (such as roulette or blackjack) for gambling

catharsis – n. formal : the act or process of releasing a strong emotion (such as pity or fear) especially by expressing it in an art form